It wasn't a bad weekend for running but it was a terrible one for photography.

The Berlingo still being sick and in the car hospital, on Saturday Nick took us to the Lochend Woods parkrun in Dunbar.
The morning was cold, grey and windy and I couldn't seem to wake up no matter how much coffee I drank. Nick regaled us with tales of dancing in the Dalriada though and the journey to Dunbar was short and fun.

Cramond is getting over-crowded and the prom holds few surprises so it was a relief to go somewhere new and do a different course.

The course goes in and out of the woods a couple of times. I was very soon quite lost but the course was well-marked and the marshals knew what they were doing, so there were no problems. It was good to get out of the cold wind and into the trees.

As I was coming out the woods for the first time I was warned to keep over as the leaders were coming through. Who should come flying round the corner but Peter and Nick. Hurray! We were winning!

The field was nicely stretched out on the first lap round the playing fields so in the woods there was little exchanging of places. I passed a couple of people but they didn't like it so they passed me back. Around about the middle they moved away ahead of me and I thought that was that but towards the end I noticed I was gaining on people again - I guess it's all this long training I've been doing. I passed a couple of "girls" in the last few hundred meters and only realised after looking at the results that they were over 50, same as me. Haha. I was 2nd over 50 "girl". 1st was Clare Gilchrist who was 2 minutes ahead and therefore never caused me any trouble at all.

Nick and Peter had their own battle for supremacy and in the end Nick prevailed with Peter a very close 2nd. It was all very exciting and afterwards we were ready for some ginger-ale. Or cake. Well Nick suggested more coffee but this was vetoed by the two oldies, scared it would interfere with our afternoon nap. 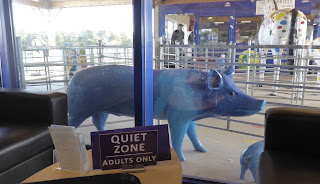 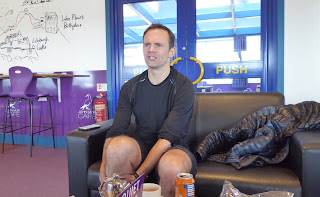 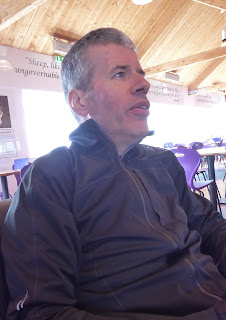 Afterwards we went for a tootle around East Links. PB saw some orange tips which flew away into the llama enclosure and just about drove him mad.

The next day I was to run at least 21 miles, according to my schedule. It was to be my last long run before the marathon so I wanted to be sure of doing it. There was talk of all of us going running again but I thought if I really wanted to get that run done I was best running myself. Peter and Nick were going to run together but then plans changed and Peter decided to chase me down the road, giving me a head start of an hour or so.

I was heading to North Berwick, hackneyed as that is, as the wind was favourable and the trains seemed to be running again. It was cold but the morning was cheered by seeing a number of friendly familiar faces along the way. I saw Bert Logan  and Neil Burnett of Carnethy and then Judyta who does the pilates on her bike, and then Michael Law on his bike. I got high-fived by Roly McCraw as I was coming out the far side of Preston-pans and he was closely followed by a possie of Porties. I remembered how nice it was to be part of the running scene! It makes living in a city feel more like living in a small town, but without the gossip.

At Seton Sands I spied a baby seal which had "passed on" and was now smelling to high heaven. It was a grizzly sight and was the first thing that had made me want to get my camera out. When I put it on it told me the battery was flat, however,  and put itself straight back off again. Hmmph. It was only my light camera which I ungenerously call my "shitty little camera" anyway. My back-up camera was the camera on my phone which is laughably bad. It wasn't a particularly scenic day and I was supposed to be getting a shuffle on anyway so I wasn't too bothered. Nobody probably really wants to see a rotting seal anyway.

Not long after I was on the sandy paths through Longniddry Bents I was hailed by PB, who was all in a lather. He was relieved to see me as this now meant he could slow down. He'd run the first 12 or 13 miles at 7 minute mile pace, with a big rucksack on and had a wet back. I took some photos with my phone just for fun. 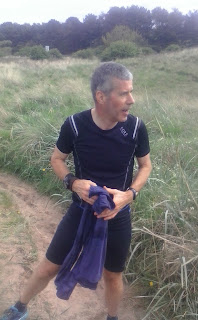 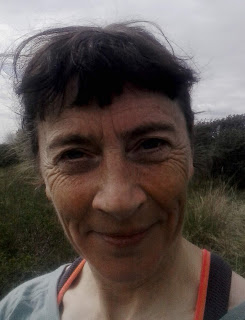 Once we were running together we both slowed down. I'm sorry to say we were bickering a bit. We were both tired and running on the road isn't lovely. We had some coffees and snacks  at Aberlady which cheered us up. After that we headed to a top-secret location where Peter had had a tip-off about some butterflies. More than enough said. When we arrived at the location everything went surreal for a while. Some butterflies did, suddenly and unexpectedly, emerge. It was cold and grey and we thought there was pretty much no chance there would be anything. They were very flighty and Peter gave frantic chase, camera at the ready - but they kept just ahead and frustrated him. Then he had turned around and was coming down a steepish slope at speed, when his feet went out from under him and his camera hand went down instinctively to save him and....ahhhhhhhhhhhhhhhhhhhhhhhhh....his camera was broken!!! That wasn't a good moment. Oh my jiminy cricket no.

I'll tell you what though, I started running faster again after that. All the adrenaline and horror. We picked up the pace. As we were nearing NB it seemed touch and go if we could maybe catch a train. Most of them were at 20 past the hour and one was at 24 minutes past the hour. That was all I could remember. We'd missed the 20 past cut off but as we passed the Welcome to North Berwick sign there was still conceivably time to catch a 24 past train......We would have....if there had been one...but there wasn't one....there were no trains at all. They had all been cancelled. It would have been nice to have a small serving of success and happiness on top of the bitter biryani we had already been served up. But instead we caught the bus home.

Well I did get my 23 miles run. And we think Peter's camera is still under warranty, so it could all conceivably come right. Especially if we ever get the car fixed. It's still waiting on a part. 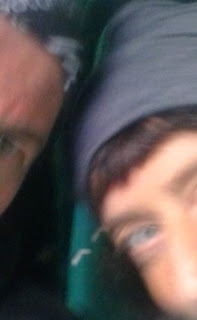