I was really tired after the Dumfries Half - probably more the sleepless night in the hotel than the race itself - but I didn't develop any new injuries afterwards. It seemed possible that I could maybe do the Dunbar 10 miler.

This is a great race and the only thing that's interfered with me doing it over the years is it tends to clash with the Skyline - if not directly then by being too close for comfort. No need to worry about that this year so I entered. Peter had been toying with the idea of going to a school reunion the night before, which involved splashing the cash left right and centre for the event itself and dressing up in a kilt. He seemed to be going along just to show his old school friends how fit and young he still was, although afterwards he told me there were some people he wanted to see. Anyway, he didn't go, saved himself probably £120 and was fresh enough for the race. I better just talk about the race. I'm already probably in trouble.

So it was nice weather for the race. I had no idea what to expect from myself. I thought that my Dumfries result was probably off even for me in my current state of fitness, so maybe I could expect a little more from myself. Still I started conservatively and "let the race come to me". I began to feel some strength as we got off road and on to the uphills, and I could see I was gaining on some Porty vests little-by-little. This gave me a clear goal and I was past them by the top of the hill - but I knew that this small glory would probably be short-lived. Never mind. Better small glory than no glory at all. Dunbar Running Club is full of nice people and it was very heartening to see friendly marshals Anne Hay and Brian Davidson and Theresa and new(ish) baby. The handing out of the race numbers was handled ably by Nick Williamson and results wizard Stuart Hay. :-).

I got thoroughly re-overtaken at about mile 9, but there wasn't much I could do about it except spin some philosophy and keep on keeping on. 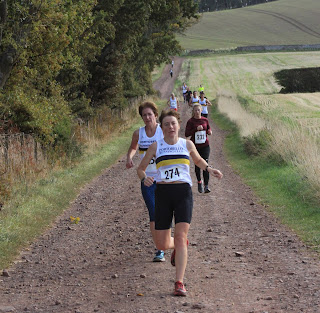 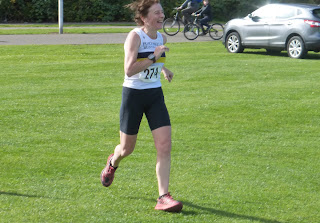 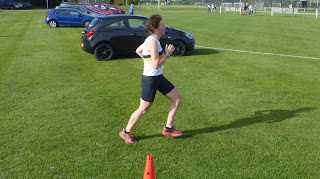 Towards the end I overtook a traffic cone. Left it for dust. 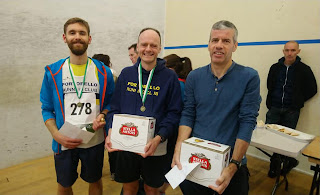 The boys did well and Peter has made good inroads into his box of Stella. 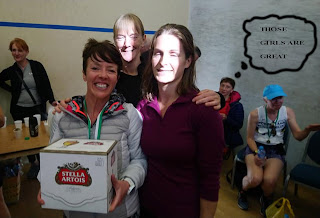 The Porty Ladies likewise did well. All I could do was look on in admiration.

My pace - I know - yawn - well it matters to me - was 40s/mile quicker than Dumfries - which made me happy.

I don't for a moment think that it's a good idea to start racing regularly again, but I must say I've got a taste for getting out and seeing folk. The forecast for today was pretty dire. I thought it might be an idea to get up early (for us) and go and do a Parkrun, thus getting some exercise and air early in the day so I could enjoy a guilt-free rest of my day slouching about inside.

The weather was as promised. We had some worries about getting there in time. I set my alarm for 6.30 and then accidentally went back to sleep for 40 minutes. We were racing leaving the house and then there was the odd queue of traffic along the way. The coffee and race adrenaline was saying GO but the 20 mile an hour speed limit and misted up windows were slowing SLOW. We probably timed it about right. Just 15 minutes to go for a pee, warm up and take some layers off.

We knew Nick W might be coming but little did we know he'd set off running from Portobello thinking it was about 5 miles to Cramond. Imagine his surprise, then, to realise it was more like 8! I never saw him before the run so thought he hadn't come at all, but I saw him at the end. He'd just made the start by the skin of his teeth and then incorporated it into the rest of his run. He set down a fine set of splits, nearly every mile being quicker than the last.

Ah parkrun - such a short run and yet such a long run. I knew early on I was not going to be setting any records. I can't blame the conditions because they were nearly ideal. The rain kept it cool and what wind there was was coming from the east. There is plenty of crowd cover in my part of the park run so I never suffered from a head-wind at all. George Lupton was out with his running children looking a damn sight more comfortable than me. I passed them briefly at about the half way mark, but they passed me back shortly afterwards and then beat me by a good margin.

A big treat was seeing John Forker who I have not seen for years, and Shelagh McLeish who I maybe saw briefly at the Edinburgh Great Run 10 miler last year...or it might have been the year before. It was also great seeing other Porties who are just regularly out racing. 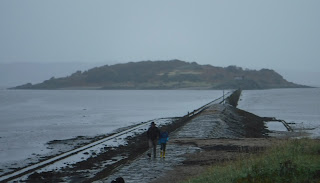 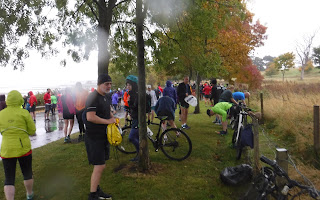 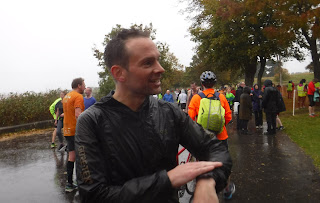 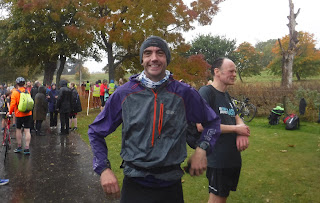 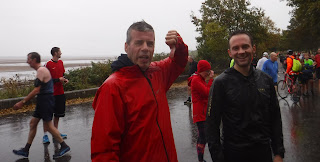 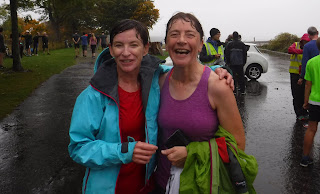 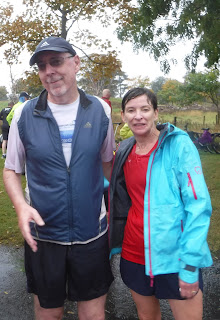 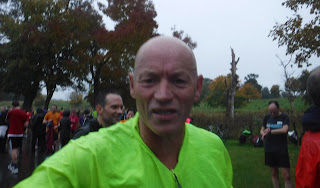 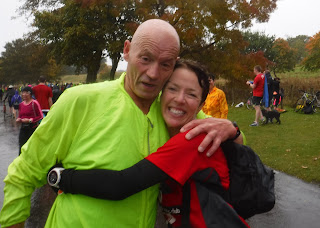 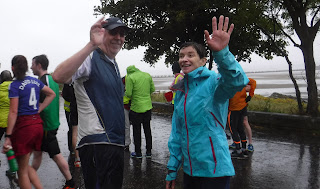 Next we went to pick up a parcel from Telferton. I thought it was going to be a book but it's a DVD of "Running the Sahara"; a film made about runner Charlie Engle, who's an ex alcoholic drug-addict turned ultra-runner who did some jail time for alleged mortgage fraud. I've been reading his book and I don't know what to make of him. What he says rings true enough to me, but I'm always cautious since I stood up for Lance Armstrong for years. Still, Lance Armstrong wasn't innocent, but I can see the innocence in him. No need to get too binary. Charlie says they made him look like an arsehole - sorry asshole - at the end of the film just to create some dramatic tension. I'm away to decide for myself.

Emmmm, next races? WOL half? This new traily one in the Braids? They're both on the same weekend in December. Could that be fun, or is it nuts?

Nothing in particular you understand. Just the grey weather and the autumn settling in and the geese calling their regretful farewells as they pass overhead....sigh.

I was on a course all weekend. In the tradition of PB let's say it was a hockey and speed-reading retreat. I had today to recover. I had not run since Friday - in fact I had been sitting on my arse since Friday - and I'd been in town and indoors most of the time, so despite Peter's protests that I should maybe give him a run to work with his ladders, I headed out of town, pausing only at Telferton to pick up the parcels they couldn't deliver. I had no idea what was going to be in them. I've got a habit of ordering books. No prizes for guessing what must have been on my mind when I ordered these ones! 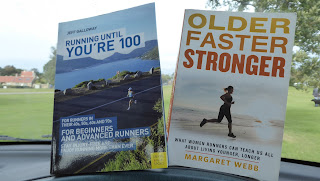 Lookout everyone. I'm going to find out how to run fast! At last! 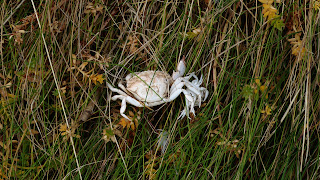 It was nice to be out but the mournful geese did fly overhead. "Shut up Geese, you say the same thing every year" I told them. 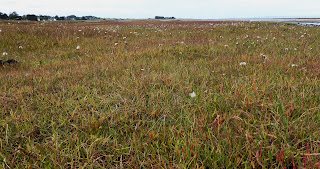 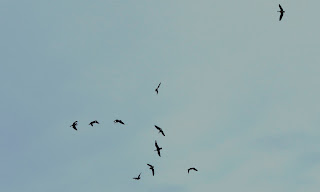 Not even any naked men in the dunes today. 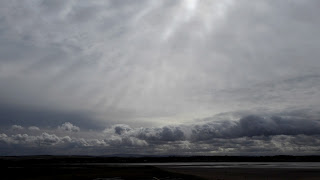 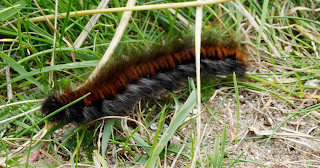 Only a hairy Columbus for company. 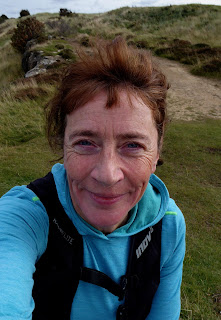 At Maggie's Loup (I think that's what it's called) it occurred to me that the last time I was here on my own I still thought I was training for the Manchester Marathon and I sat on the rock there and took a selfie. 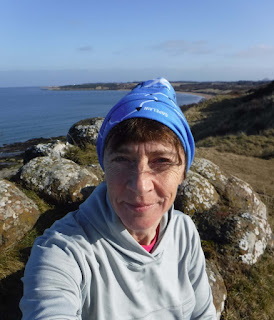 Here's the news for this cheery face from the future. It's not happening. You might as well get used to it. You're going to be injured all year. :-( 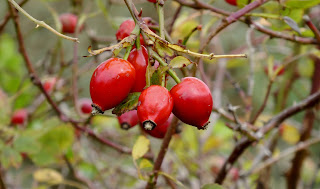 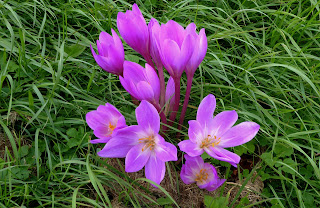 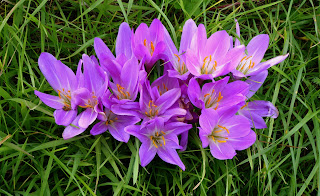 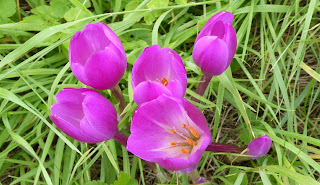 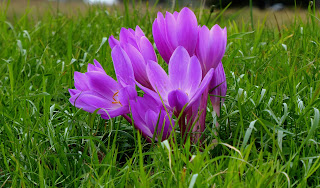 Look at these pink lovelys though. I have to go and see the heart people on Thursday again so I hope they don't bother saying anything weird to me. Then Dunbar 10 miler on Saturday. :-).