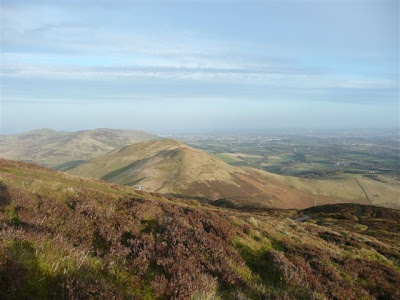 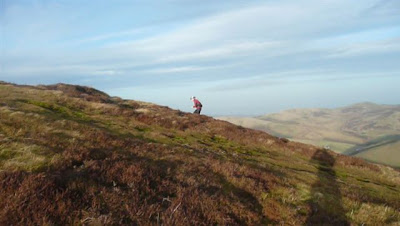 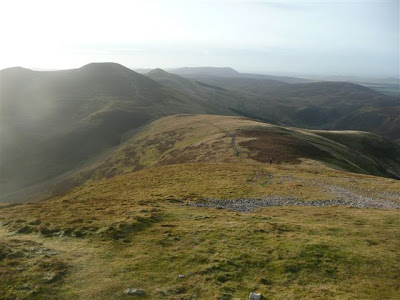 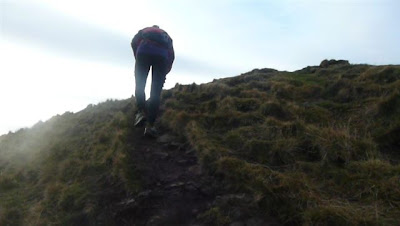 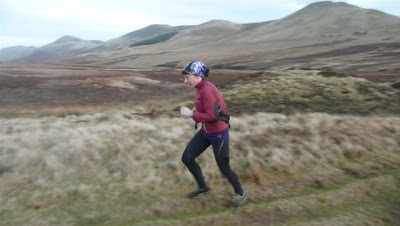 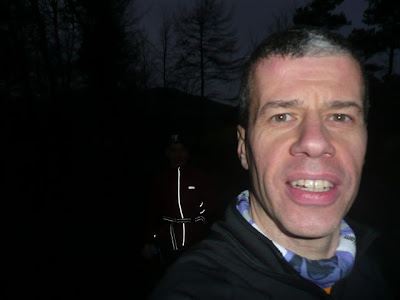 Nice sunny day today. Cold but fine once we were moving. Over the high tops; Turnhouse, Carnethy, Scald Law, S. Black Hill, East Kip, West Kip, then down the Drove Road, round the back of Black Hill, over Hare Hill to the summit then back by track and road to Flotterstone Carpark. 13 miles in 2hrs 49mins. Back just at dark.
I did a fantastic leap over a bit of flooded ground which I'll upload unless its too big...
Posted by Yak Hunter at 20:08 No comments: 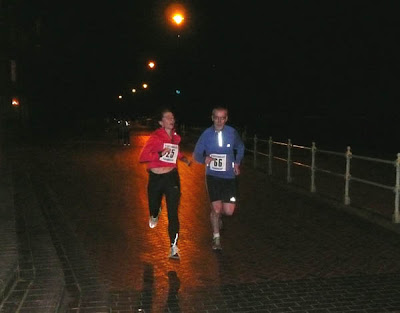 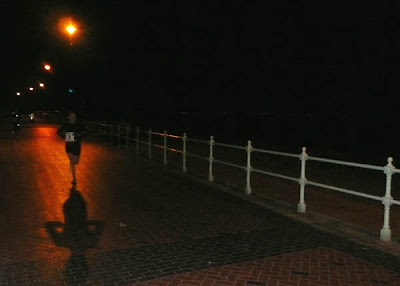 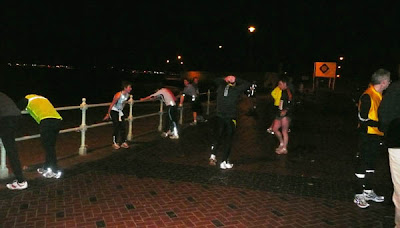 It was awards night at running club the other night and Richard had set up a set of three consecutive one mile races, set off in three different groups, the object of which was to run the first mile quick then the second mile quicker and the third mile as close to the pace of the second as you could? Confused? We all were. We took the car to club instead of the usual 3 mile run there as it was blowing a gale so were not warmed up for it. Running a mile is an excruciating experience!
There was about a 2 min recovery between miles depending how fast you ran, and these recoveries were spent with people bent over double or leaning over the railing onto the beach complaining they might be sick.
I ran the first one as quick as I could and then died off.
I like the atmospheric pictures of runners in the dark.
Posted by Yak Hunter at 09:14 1 comment: 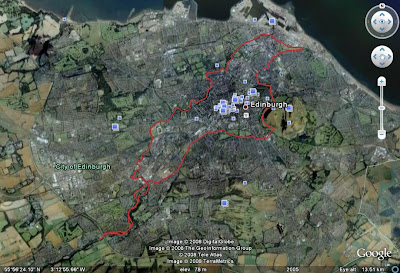 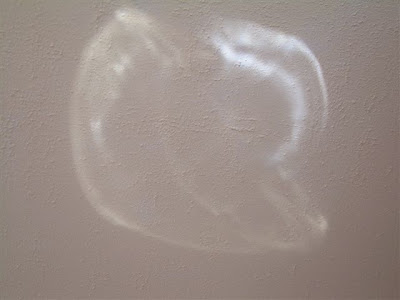 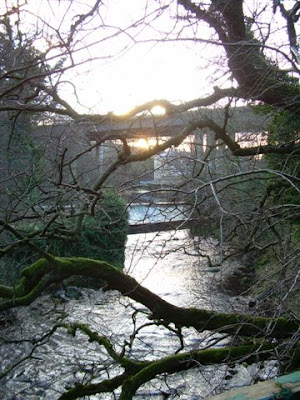 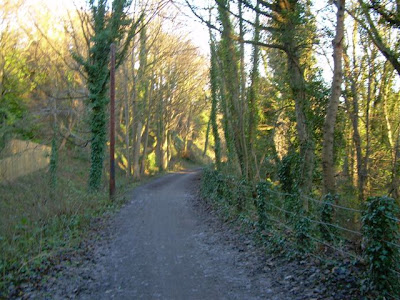 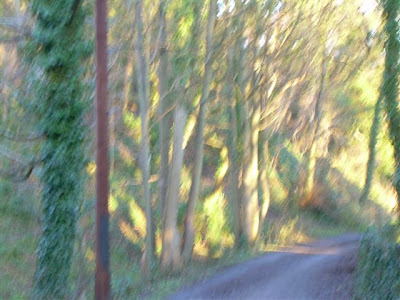 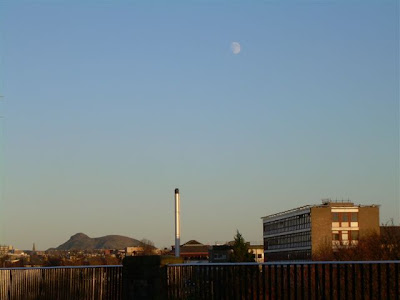 I started planning my running for the week and realised there are about 4 days when squeezing in any kind of a run will be well nigh impossible. That added to a slowly rising panic about getting some distance done gave me the resolve to go out and get a long run in. I have 2 plans for 2009 running-wise. One is to do the glamorous Draycote water 35 miler which is 7 X round a reservoir somewhere 30 miles from Birmingham in February. The other is to do the Highland Fling 53 mile race late in April.
I've been googling training plans for 50 milers and am most taken by one shown on the US runner's world site, mostly because of its thoroughly demanding nature. It will take some adaptation as I don't automatically get weekends off work but I'm going to give it a shot.
http://www.runnersworld.com/article/0,7120,s6-238-244--7556-3-2X3X4-4,00.html
I think my legs were still tired from Saturday's icy half marathon and the pace was slow. There seemed no sense in pushing it though.
I took a camera, mainly as a distraction, and also my ipod shuffle. I have recently discovered the genius playlists that you can generate on itunes and I am a fan. Our library on itunes is a mixture of Peter's and my music and ordinarily our two different tastes don't get along that well. Some of my music is a bit loud, dramatic and dark, or too dominated by "guitar and lyrics" for Peter's liking. His music can veer towards the repetitive, gimmicky and overly effete in my view. However, along comes genius and makes a playlist out of both our musics and I don't know how it does it but its great. The Fleet Foxes are blended with Jesus and the Mary Chain. Kings of Convenience meet Joy Division.
About 6 miles into my run I met Rachel and Jackie from club. If I'd had my wits about me I would have taken a photo; but I did not! We chatted about the club night out and the recent beautiful weather. They were on a lunchtime run and so were moving through a bit quicker. I let them go. Too early to push it.
I ran up the Water of Leith until I'd run a little over 11 miles and thought I better take some photos since I'd dragged the camera all this way. It was already quite dark in the trees as the sun was getting low. There were a few bits where the sun broke through which were lovely. I was loathe to stop though because every time I did my already stiff legs stiffened up further.
It worked out a 19.5 mile run in 3hrs 06 mins which is 9min33s miling. Its a while since I've done a long run so slowly but it was icy underfoot in places and I was tired and concessions must be made! My two fears for the long running ahead is that it makes me really slow or I get injured. I hope not. I'm committed now anyway. We'll see.
The second photo is a light thing on the ceiling. I'm making a collection of them.
Posted by Yak Hunter at 16:37 No comments:

Water of Leith Half Marathon 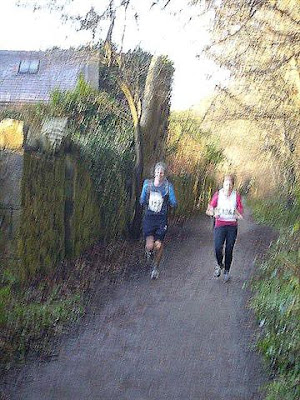 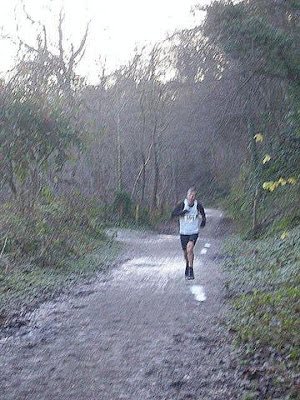 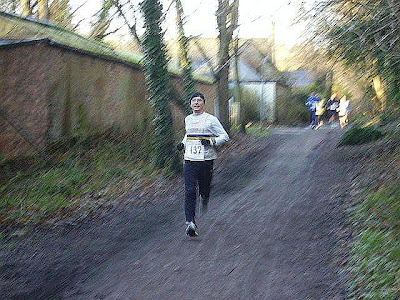 Yesterday was the Water of Leith half marathon. The event for me was coloured by it having been the Portobello Running Club xmas night out the night before. I thought about not drinking, but not for very long. I managed to stick to only Guinness and wine, with mineral water at times. I have no idea how much I had. It really was a good night out. Its amazing how having been running with people makes you feel at ease with them even if you've never had a proper conversation.
So we were in bed just before 2 am and alarm clocks set for 7 am.
7 am did not feel very promising. I had a headache and could still taste wine. It never occurred to me not to run though.
We were meeting in Leith to get a bus up to Balerno. Peter and I did the best job we could to improve our physical state and walk jogged down to the bus, there to meet Richard and Ben who were in similar condition. Also there were many familiar faces from Heb3 races. Peter and Ben knew more of them than me.
The W.O.L half is a small invitational affair which keeps the organisational hassle to a minimum. Its run as a handicap race so that there are not too many runners all charging down the water of Leith at the same time as this route is also littered with dog-walkers, mountain bikers, and families with small children.
At Balerno we set off on a sheet of ice and there were stretches of ice for the whole route making the going very hairy and slow at times. Some people managed to clock good times despite the surface conditions. Maybe a different style of running or a different mind-set.
I kept a close eye on my condition as I ran, the challenge being to push as hard as I could without getting into hangover trouble - particularly gastric trouble. As it was I was scared to drink any of the juice I had brought in case it upset the fragile balance within. By the end my legs were crampy but otherwise I was alright. Slower than I would want to be.
Its not really a half-marathon. Varying Garmins give it as somewhere between 13.5 and 13.8 miles.
The sunny, icy cold weather was enjoyable to run in. Its been a nice time for running this last week. Today we're back to warmer, darker, windier weather.
The photos below were sent to us by Lynn Hanley, who thought my blurriness might be as a result of my drinking the night before. I sharpened them up in a way not approved by Peter, but I quite like them. I think the light in the trees looks like a Turner painting.
Posted by Yak Hunter at 18:13 No comments: